China, a Russian ally, is observing the war in Ukraine while processing possible scenarios as to what may happen in a possible invasion of Taiwan. At the same time, China is gaining a lot from the Ukraine war. Namely, cheap Russian oil and gas, the outcome of the Ukrainian invasion, and the West’s continued response to it may pave the way for future actions of China in East Asia. Russia even supplied nearly 30% of its weapon trade to Southeast Asia.[1] Nonetheless, the war in Ukraine terrified the world and ensured war could happen on European soil. President Putin readied his nuclear forces on high alert.

If the People’s Republic of China enters a conflict in East Asia against Taiwan, does this mean World War III has begun?

President Biden reassured that the United States would intervene militarily in Taiwan in case of a Chinese invasion. This reassurance has raised tensions between China and the US. China commented in a fiery statement,[2] “Playing with fire and itself will get burned.”[3] This reciprocity of fiery statements means there will be a great cataclysm in East Asia that can influence Southeast Asia, South Asia, and Oceania. The tremendous loss economically around the globe, and the world will be divided into a bipolar world as Russia and China will lead the Eastern camp. Consequently, NATO and its allies will lead the Western camp. It is a significant domino effect. A war between China and the US will cause mutual destruction due to nuclear capability. As well, the only two atomic bombs that happened in history were in East Asia.

A war between the US and China is dangerous for the world, especially since Russia is at war; this means that the world’s three highest-ranking militaries will be at war. The US has many allies in East Asia and Southeast Asia, with the American reassurance to Japan as its main ally in East Asia. Moreover, a war with China, the world’s factory, will produce a plethora of crises globally.

Ukraine’s ranking in agricultural exports is the following, sixth in wheat, third in barley, third in maize, and first in sunflower seed oil, as Ukraine has an impact on global agricultural output. The danger of a coming famine alerts the food security of many countries. However, a war between the US and China will cause a shortage in the high-tech industry.

Taiwan is the leading computer chip producer worldwide, with a staggering 90% global output.[4]

Suppose a war occurs between the US and China. In that case, Russia will join them, meaning the most powerful permanent members of the United Nations Security Council will be at war, ending the current world order. However, this trade of fiery rhetoric between the US and China, and descending into a World War 3 scenario, is unplausible because both countries will lose in all domains. Such as the economic and military domains. China made artificial islands in the South China Sea and claimed them as its own, but taking Taiwan is stepping into an ambiguous matter that is not usual for China. In opposition to the leader of the world, the United States of America, risky wars are not China’s style at all.

President Biden’s visit to Japan brought forth the need for Japan to improve its military capabilities.[5] While, the Quad summit in Tokyo, which include India, Japan, Australia, and the United States, is reaffirming its unification.[6] As can be seen, President Biden is attempting to deter a Chinese attack on Taiwan by unifying the many allies of the US in South Asia, Southeast Asia, and East Asia. President Biden even visited South Korea, announcing Hyundai’s investment of $5 bn in Georgia in the US and strengthening ties with South Korea. South Korea invested a total of $10 bn.[7] These political actions by President Biden give China a lot to consider as China is surrounded from all directions except the North. The South China Sea is adjacent partly to some of South China’s regions. However, China is fortified in that region. This shows the difficulty in facing China geopolitically as the West of China is a mountainous region. Not to mention the artificial islands in the South China Sea.

To conclude, President Biden said, “The United States will again lead not just by the example of our power but the power of our example.”[8] This is evidence of the underlying US diplomacy under President Biden. However, only time can tell if it will work in deterring China, as it surely did not stop Russia from invading Ukraine. Therefore, Russia and China are taking the opportunity to expand their territories, so the US must take a firmer stance to deter China significantly. To deter China, the US must use its economic instruments.

[8] “Remarks by President Biden on America’s Place in the World,” Whitehouse.gov, The White House, February 4, 2021, https://www.whitehouse.gov/briefing-room/speeches-remarks/2021/02/04/remarks-by-president-biden-on-americas-place-in-the-world/. (Accessed May 24, 2022). 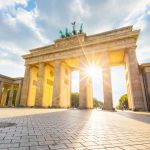 Germany must choose between Russia or NATO 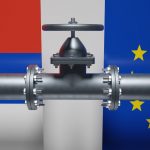