There has been a lot of talk as regards the historic analogies of the Russian invasion in Ukraine and other similar ones in the past. However, we should not misuse history and we can never be sure that we draw the correct conclusions.

Usually, we tend to compare Vladimir Putin’s invasion with Adolf Hitler’s invasion in Poland on September 1, 1939. Indeed, Putin invaded a sovereign country on the pretext of being provoked and attacked and having the moral obligation to protect his nationals (a significant minority in the host State), that had allegedly been abused by the intolerant majority. He used his proximity with no major power being really close to intervene and of course he took advantage of his great numerical superiority. It is obvious that the plan (similar to the one Putin had for Crimea) was a quick victory and the annexation of the conquered area. For Putin it seemed that he would annex the Ukrainian part he would manage to control (reminding of Anschluss) or at least declare an autonomous State that he would recognize. The only part that history starts to differentiate is that the Allied Powers had already appeased too many times Hitler and when he invaded Poland they declared war to Nazi Germany. And the Russian leader made sure that this could never happen in the Ukrainian case, using coercive diplomacy in different rounds of futile talks before attacking. So, is it possible that Putin drew an analogy from a different case in recent history?

The answer is that the Russian leader, assessing the reactions of the West might have drawn an analogy from the Turkish invasion of Cyprus on July 20, 1974. The resemblance is striking as regards the pretext, the proximity, the military advantage of the aggressor, the failed effort to create and recognize a State. The international community remained idle and probably this is what Vladimir Putin expected. The rationale was at the time that during the Cold War any attempt to use force against a NATO country would have been extremely counter-productive. So, the national interest of the Western countries was to simply condemn the invasion and impose some insignificant sanctions. In the Ukrainian case the energy dependence of the Europeans made them vulnerable and thus Putin probably believed that they would not dare to really hurt the Kremlin. Was he not afraid of sanctions at all? It is clear that he had been preparing for a long time for this eventuality but still he was probably taken aback by the magnitude and the coordination of the sanctions. He knew very well that for sanctions to work they have to be persistent, comprehensive and they always hurt the imposers as well. Hence, they are hard to impose and harder to sustain. Having the energy weapon in his hand, along with his nuclear deterrence, having India and China supportive or in the worst case neutral, he most likely assumed that he could get away with the invasion in the same way he got away with Crimea, not to mention Georgia and Moldova.

In this war we had two miscalculations that should lead to certain lessons learned and relative recommendations for future application. The first is the failure of the neo-realist approach of the Western analysts who tried to predict Putin’s reaction using “orientalist” lenses. A constructivist approach that would have taken into account the Russian psyche, Putin’s megalomania and an ideology stemmed from years of propaganda of a bear that unfairly had been gradually driven away from its own taiga, they could have foreseen the outbreak of the war. Russia miscalculated the will of the average Ukrainian to resist an invading/ occupying force and the forms of support the Western countries could provide. Hence, the invaders miscalculated the course of the war and its duration.

The recommendations for the future have various target-audiences:

The weak countries must learn that in dire need they are alone. Nobody will really come to their aid. Some people in Taiwan must be very skeptical at the moment.

The strong countries must learn that conquering is not an easy task. Even if it is easy, there are hundreds of ways to get in a country but none to leave from it. After all, the Americans in Afghanistan, after 20 years of economic bleeding, managed to replace the Taliban with the Taliban.

The political scientists should learn to use different analytical tools to explain and explore each case – including the mentality of the leader. We do not all have the same rationale.

Last but not least, the diplomats should try to understand why deterrence failed, why coercive diplomacy seems to fail and be really innovative in their approach to solving complex problems, always providing solutions that can be acceptable by all parties: the winners cannot take it all and the losers should be able to save face. And in the Ukrainian case it is too early to assess if Putin will be on the winning or on the losing side. 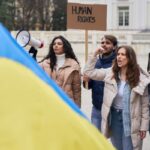