The Exploitation of Hydrocarbons and its Impact on the States’ Military Capabilities: The case of the Republic of Cyprus

Aristotelous, A. (2015). Center for European and International Affairs. Available at http://cceia.unic.ac.cy/wp-content/uploads/article06-A.Aristotelous-12-4.pdf Kegley, C. (2007). World Politics: Trend and Transformation. Boston: Thomson Watsworth. Kepe, M., Muravska, J., Flint , R., Retter, L., Ward, A., & Nathan, R. (2019). Opportunities for European Collaboration in Armored Vehicles. Cambridge: RAND Europe. Nedos, V. (2019, September 26). Kathimerini.gr. Available at https://www.kathimerini.gr/1044338/article/epikairothta/politikh/met-empodiwn-oi-toyrkikes-gewtrhseis Radin A., Davis, L., Geist, E., Han, E., Massicot, D., Povlock, M., Reach, C., . . . Long, A. (2019). The Future of the Russian Military Russia’s Ground Combat Capabilities and Implications for U.S.-Russia Competition. Cambridge: RAND Europe. DISCLOSURE All written content of this article on this site is the exclusive copyright property Strategy International (SI) Ltd and the author who has written It. No use can be made unless there is a written prior request and consent by the author and company. Requests can be made at [email protected] 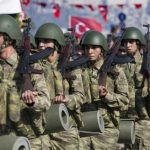 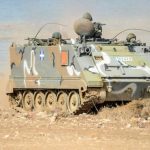